How to analyse gymnastic movements effectively?

A good movement analysis is essential in sport in order to eventually train a movement well. The coach’s role is to analyse a movement in order to provide the gymnast with good feedback. With this feedback, the movement can be perfected.

In practice, there is often no ”real” examination of the total movement. Often, feedback is given on ”mistakes” in the partial movements. For example: Lex finds it difficult to actively and quickly move away from the pegasus when making a turnover. The trainer tells him that he should ”actively push off from the shoulders”. However, the error may already be in the run-up, or the fierce jump action from the plank. This error in the partial movement can therefore already start with a too slow approach or jump action. Lex tries to push out ”more active and faster” from the shoulders but still he sticks to the pegasus for a long time. Disappointed Lex walks back to the run-up track, while his trainer again tells him to ”push off from the shoulders even more”… 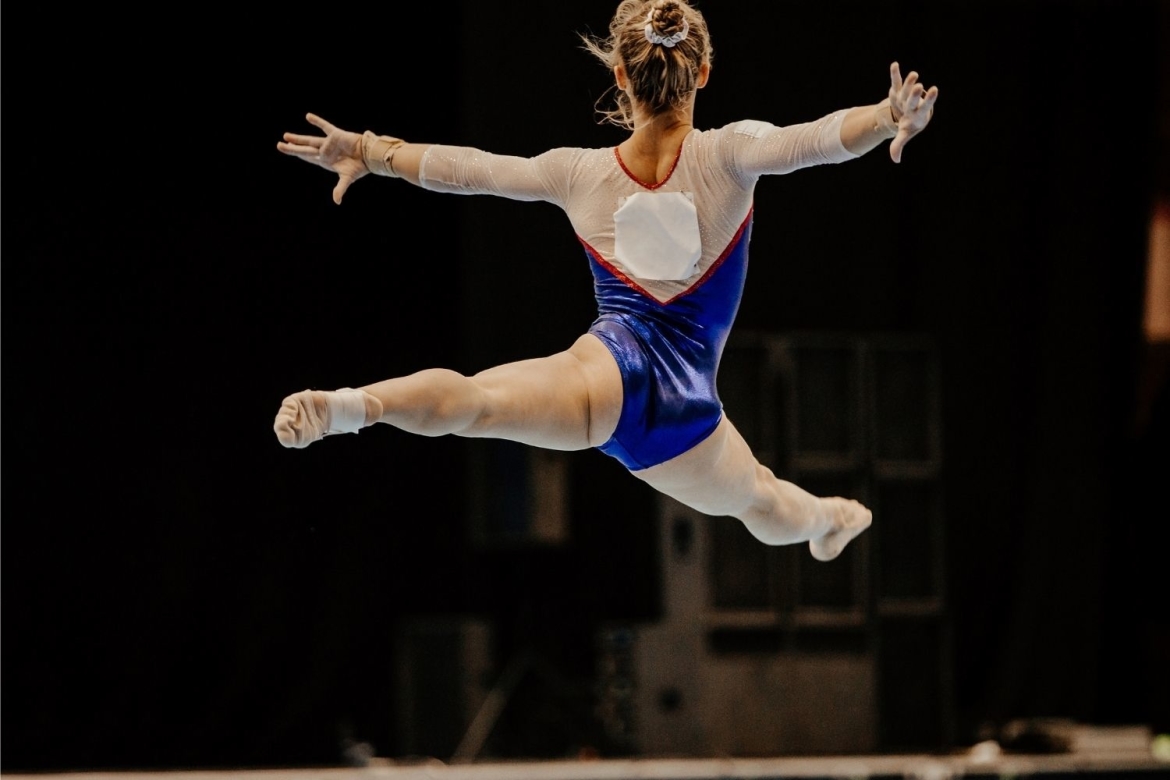 Observe the movement. Do this from different planes. You can analyse a movement from a sagittal, transversal or frontal plane. The image on the right shows which planes are meant by this. A joint makes certain movement movements from each plane. That is why it is important to include all planes for a comprehensive analysis. 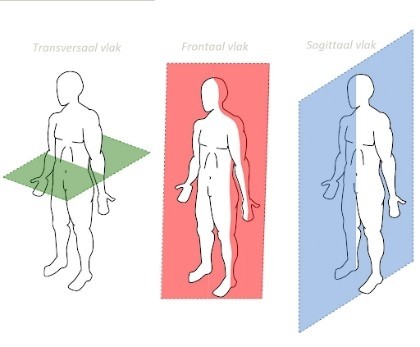 Hanna finds it difficult not to fall through in the handstand. 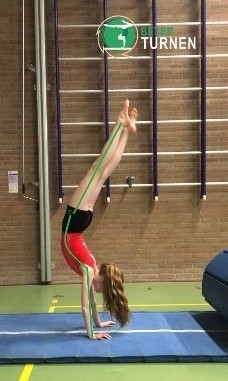 Her coach follows the step-by-step plan described above. He divides the handstand into six phases with the corresponding points of attention:

A large drop-out pass is made, the swinging leg remains in line with the trunk (play of lines). Hands are placed on the ground well past the leg at shoulder width.

The second leg is swung up and joins the first leg when the legs are above the gymnast’s hands.

The shoulder angle is fully opened, the back is straight as the hips (not concave or convex), legs are closed and actively stretched. The shoulders are also actively pushed out by making the body ”as long as possible.

The second swinging leg comes back first, well behind the hands.

As well as the starting position.

In phase two, it is noticeable that the hands are placed quite close and that the swinging leg is above the head very soon. The shoulder angle is not opened either. In phase three, the legs are closed behind the head. To stay in balance, the back is drawn hollow.

According to the CLUKS, Hanna has to fulfil the following movement conditions, among others:

The coach discovers a mistake in phase two. Hanna places her hands very close to her feet. When she uses her leg in phase two, the swinging leg is soon above her body’s centre of gravity. In phase three, she connects the legs beyond her head. As a result, her back is hollow and she folds over. She also fails to fully open the shoulder angle.

Her coach gives her the tip to work on phase 2. The feet should be placed over a line, and then the hands over another line to extend the deployment phase of leg and arm. In addition, she trains the mobility of her shoulder by stretching it frequently.

If you want to read a more detailed description of the handstand, read this article: learning handstands

There are also useful tools to facilitate the motion analysis. For example, there are many apps that allow you to film the movement and watch it back later in slow motion. Also, there are often possibilities to add lines or other drawings to the video. This can have a clarifying effect.

Additional tips when analysing a movement:

Other examples of analyses

Watch more videos on our,YouTube Channel! On this platform you can become a Premium Member and get access to 2500 exclusive drills & exercises videos for gymnastics coaches.

Round off and back handspring

About the author
Roxanne Boersma
Website
My name is Roxanne Boersma (24) and I work within Gymnastics Tools as a content developer and coach. I have been doing gymnastics since I was 12 and have been teaching gymnastics to various selection gymnastics groups since 2012. In addition to my passion for gymnastics, I am active in fitness and health (lifestyle and nutrition). I am currently working as a physiotherapist.Quote: "Never give up on what you want to do. The person with big dreams is more powerful than one with all the facts."
Others also read these

Coordination in gymnastics: watch out for muscles; anticipation!
08 oktober 2021

Airtrack training; which exercises can be performed on it in gymnastics?
07 oktober 2021

Tsukahara; tips for learning and improving in your own gymnastics class
22 september 2021