Tsukahara; tips for learning and improving in your own gymnastics class

The stages of Tsukahara 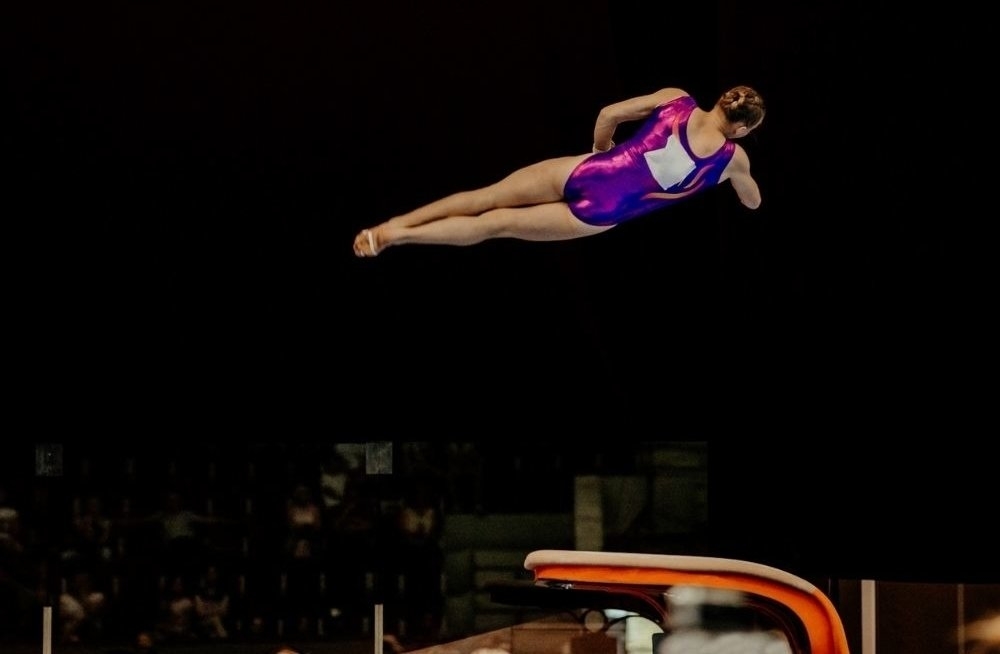 Exercises for pushing off and the kurbet:

These are all kinds of exercises that make gymnasts get more rotations.

Additional exercises for the Tsukahara

You want to have a bit more space to be able to make a good landing in the end. For this gymnast, it was one of the first times she had finally made a Tsukahara. Before that, she had done it several times with help, but in this situation she did it on her own. You always want a gymnast to know just before the landing when they have to bring their arms forward to make the landing. The more space you have, the more time you have for the landing and that you can eventually stand still.

Assisting with the Tsukahara

Many coaches find it difficult to help with Tsukahara. You have to do quite a lot as a coach and it goes very fast. It also varies a lot per athlete, how they do it and if you have confidence that you can have that athlete. Because if someone refuses a Tsukahara, then you really have to know what you are doing as a coach, so that you can be sure that that person will not land on his neck.

You have to consider carefully as a coach whether to do it or not and when to do it. My advice is usually to build it up. You can use this exercise for that: Put a trampoline down and let your hands push into the trampoline. It is a bit like doing a plank. You can stand next to it and if you eventually notice that an athlete has enough space and can therefore push off and has a good kick, then you can use that to help with Tsukahara without it necessarily being a pegasus.

It can also be with a plank, for example, where you help them by the belly and back to turn into the Tsukahara. It is the same in this exercise, it can also be on this side with the trampoline.

If, for example, you have a belt available, you could build it up in this way. I struggled with this for a while before I managed. In the end, I was able to help with a belt. It was a fun thing to do and a different way of providing assistance.

My advice would be to build it up slowly and especially consistency is very important to me as a coach. So you want a gymnast to have done these kinds of exercises many times. But also to be able to perform them consistently. And to have sufficient height each time. If they land on their hands and feet, that’s not such a problem, as long as they don’t fall on their heads. That’s something you really want to avoid, so you have to practice a lot.

But also as a coach you have to practise a lot and build up a lot of self-confidence. So of course you can stand here when someone makes a round-off to help. And the gymnast can experience how much you help. But also so that you can check whether you are standing correctly. So that you, as a coach, build up your own confidence. It is also often wise to start with two helpers, so that you can be sure that one of the two has the athlete, and that you can practice and get used to helping. In this way, you can build it up as a coach.

The technique of a Tsukahara

With Tsukahara you have different kinds of techniques and you have a technical view of how coaches look at it. So it may well be that as a coach you look at it differently. In this blog I will describe how I look at it as a coach and how I built up the Tsukahara training. If you want more tips, we have several downloads on our site where you can download checklists and you can also watch videos.

If you are an athlete or gymnast and you want more tips or more training programmes or exercises, you can go to our gymnastics platform. We also have a big platform for coaches with now something like 2500 videos, so we have all the methods and elements down and different exercises. The videos in this blog are some of these method videos.

I hope the above tips have helped you and that you and your athletes can finally start working on the Tsukahara. That you have enough confidence in them to get started. Of course I am also very curious what you think of this blog, so please let me know in the comments. Good luck with practicing the Tsukahara!

Please leave a comment on how you use these tips in your gymnastics classes and share your experience with other gymnasts.

Also check our workouts on our Youtube channel. Or check out all the exercises on the gymnastics platform.

About the author
Paul Verheul
Website
I am Paul Verheul (31), founder of Gymnastics Tools. I have been doing gymnastics for over 20 years and coaching for more than 15 years. I started as an elite gymnast when I was 18. I have learned that all motivated gymnasts (and coaches) with the right help, can learn a lot in gymnastics. After my top sport career, I decided to pass on my knowledge to other gymnasts and coaches.Quote: "Strive for progression, not perfection."
Others also read these

Coaching in gymnastics; self-direction for the gymnast
06 oktober 2021