Jump power in gymnastics; what is the best training method?

Jump power in gymnastics occurs in almost every apparatus. Take a look at the FIG, you will find numerous jumps in the tables. Jumps, beam, floor and even the high bar are parts where jumps are possible. Examples of jumps are the running jump, splits, scissors jump, change of direction jump and the pegasus jump.

What is jump power?

Jump strength is, among other things, a plyometric and explosive form of strength training. It puts a lot of strain on the muscles and joints. Because there are so many different components in gymnastics where jump power is important, there are also aids to make the jumps easier. Think of a plank, plankoline, trampoline and airtracks. There are also strict rules about mats and other materials such as the resilience of the floor that dampens the landing after a jump.

Plyometrics and explosive power require the muscles to switch quickly and are very taxing on the body. Before you can train your jumping power in a targeted way, you must first master the basic power.

Plyometrics is one of the most demanding forms of strength training. Plyometrics is a form of training in which a muscle is extended in a tensed position. Think of the collapse phase of the jumpsquat. In order to slow down the squat, your muscles tighten. You then want to jump up again as quickly as possible. Your muscles must immediately convert the force created in the slump phase back into energy in order to jump up again from a stretching reflex. You can compare this to a rubber band being released. You first have to stretch it a lot in order to shoot it away. Then the elastic shortens quickly. The muscles have a similar elasticity component.

What is explosive power?

I will clarify it with a practical example.

Take the example of a jumps combination: splits directly followed by an extended jump full turn. You want to go straight from the splits to the full twist. Then you land your splits and immediately jump up again to start the whole spin. Your muscles lengthen in a tense position and then have to shorten again immediately. Just like the rubber band you pull backwards and then slip away.

Example 2: Deep jump from the box followed by a staggered jump

Explosive power is needed for jumping, among other things. You want to kick your legs up as quickly as possible after the push-off on the plank, plank-oline or trampoline in order to make a turnover over the pegasus. Explosive power is also needed for the examples described above.

With a staggered jump on beam, you push off from a standing position. Your muscles must deliver all the power they have in one go in order to initiate the jump and spread your legs.

Conditions for good jumping power with examples for practice.

As I wrote in the beginning of this article, good basic strength is a prerequisite for training jump power. Your leg muscles must be strong and provide stability to the joints. With explosive strength you should be able to push off about 1.5 times your own body weight.

In this article we will mainly focus on jumps which require leg muscles. Explosive power and plyometrics can of course also be trained for the upper extremity (arms, chest, back and trunk).

Five of the basic strength exercises for the legs are:

Focus on the technique first. The execution is very important and is a prerequisite for making the exercise heavier later on. If the technique is good, the athlete can perform more repetitions. You can then make the exercise heavier by using weights or resistance bands. You can then add an explosive component. For example, with the squat you can ask the athlete to make a squat and then jump up as high as possible, or even a box or block, the box jump. Another example is the calf raise; have the athlete make bouncing jumps to squat landing. The athlete must then use the explosiveness of the calf muscles to initiate the stretch jump from the stop made at the squat landing. 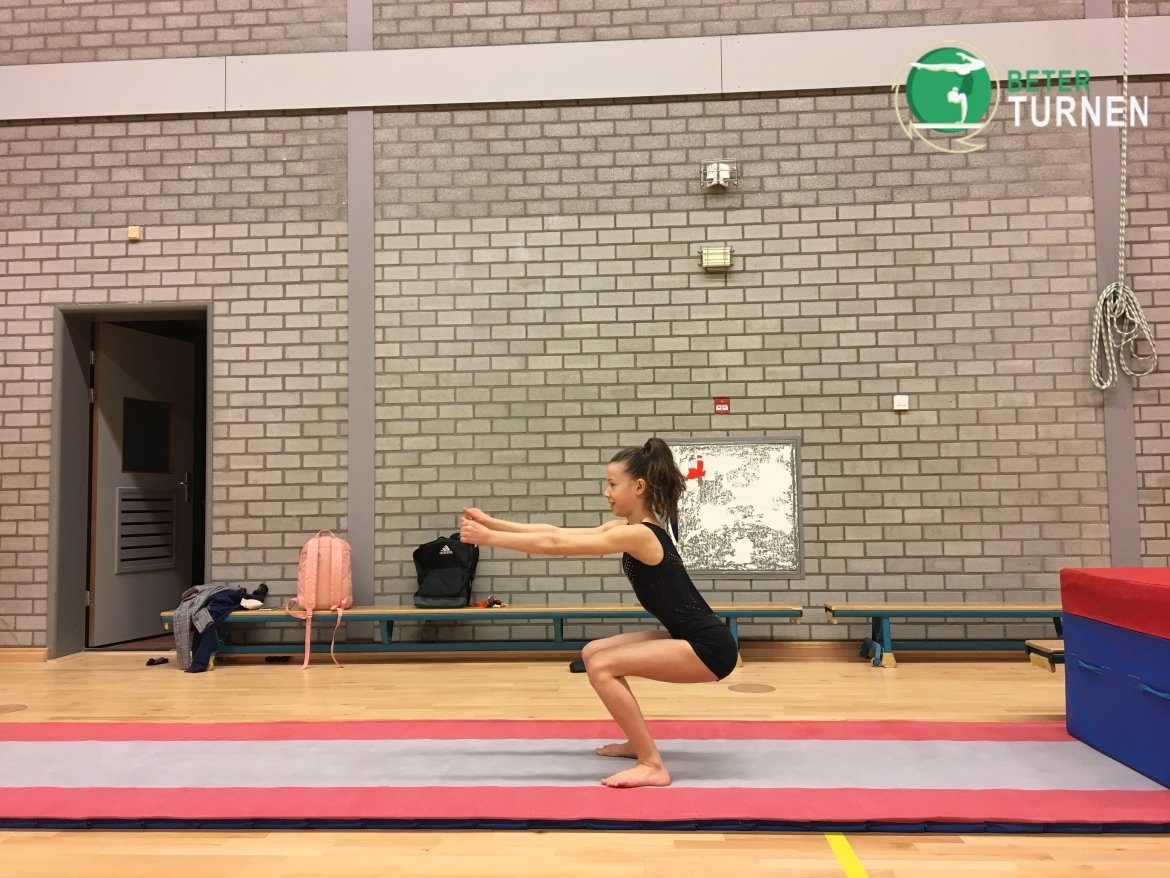 General jump power is often trained with the ABC jump. This is a methodical structure in which jumps are trained from easy to difficult. This protocol starts with the basic strength (squat) and builds it up via explosive to plyometric training forms.

An example of the jump ABC:

You can vary the exercises by performing them one-legged or two-legged, varying their height and distance.

How to train your jumping power: sport-specific, do’s & dont’s

I will go through a jumping power training for floor, beam, jump and physical with you

Preparation: This lesson is for the whole class. Have the gymnasts do the exercises in pairs.

Equipment: one board per pair, possibly leg weights

Preparation: This lesson should be done in class on the bar.

Perform the following exercises with the emphasis on jumping through from one jump to the next as quickly as possible (short beam contact).

Preparation: Carry out this lesson in stations

Perform the exercises below for 20 seconds and then alternate with 20 seconds of rest in between.

Preparation: Carry out this lesson in stations

Execution: the emphasis is on making the leg turn as quickly as possible; this should be at the same pace for each turn.

Perform the following exercises for 8 repetitions.

Preparation: This lesson is carried out in flow form.

Execution: the emphasis is on the shortest possible ground contact.

Hopefully after reading this blog you will have more insights about training jumps. The importance of this specific training is great and also the basis will determine if you can train this without getting injured.

About the author
Roxanne Boersma
Website
My name is Roxanne Boersma (24) and I work within Gymnastics Tools as a content developer and coach. I have been doing gymnastics since I was 12 and have been teaching gymnastics to various selection gymnastics groups since 2012. In addition to my passion for gymnastics, I am active in fitness and health (lifestyle and nutrition). I am currently working as a physiotherapist. Quote: "Never give up on what you want to do. The person with big dreams is more powerful than one with all the facts."
Others also read these

A more varied gym class with benches; tips from Merle and Rachel
03 maart 2022

Gymnastics lecture: what do you need to know?
05 januari 2022