Arms workout for the gymnastics training as a warm-up

In connection with the arms workout warm-up from Gymnastics Tools, I would like to go over the execution of three exercises. In order to train the right muscles, it is important that these exercises are performed in the right way. A smear in the execution is quickly lurking. This is quickly the case when the exercises must be performed at a higher tempo, such as to the chosen music to which the arm workout is performed.

With the plank, you train the form tension of your legs, hips, core (stomach and back), and shoulders.

Where do you feel it?
The plank exercise affects the whole body. You want to stretch your legs and actively close them, keep your hips in a “straight position” by tightening your buttocks, back and stomach. You want to push your shoulders completely out. 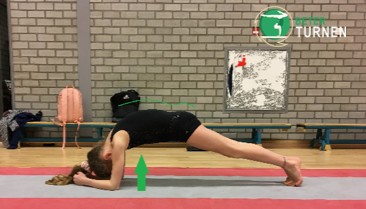 Make sure that the back is in a “straight position” during the plank. The “natural S-curve” may remain visible. Too much of an “S-curve” is often visible if the upper back is rounded too much and the middle and lower back are rounded too much. This can be solved by tightening the abdomen even more (crunch the ribs towards the pelvis to flatten the back even more).

Actively push out the shoulders so that no “wings” are visible (“winging” the shoulder blade). This can be induced by imagining a fire under the chest, as indicated by the arrow in the picture. This will draw the sternum in more and actively push the shoulders out. Furthermore, keep the head in a neutral position (different from the example shown here).

The push-up exercise trains the chest muscle and tricep in particular.

Where do you feel it?
This exercise particularly affects the chest and arm muscles (mainly the back). 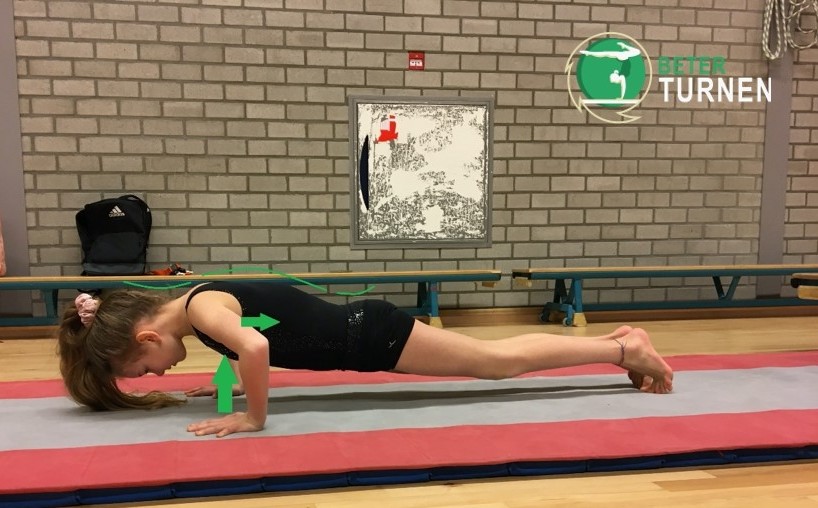 Try to start the push-up by fully extending the shoulders, just as described above for the plank exercise. Push the sternum in as far as possible and imagine that there is a fire under the chest which you want to move away from with stretched arms (vertical arrow). In this way, you avoid visible wings of the shoulder blades, also known as the ”winging” of the shoulder blade.

The hands are below the shoulders, shoulder-width apart or 1-2 cm apart. Move the elbows down, just below shoulder height as indicated by the horizontal arrow. Hold the extended position as described above. Only the arms are bent and stretched.

Keep the head neutral. The rest of the body is ”straight” as with the plank. The spine maintains the natural S-curve, buttocks are squeezed, legs are stretched and tensed.

Tip: if the exercise is too heavy on the feet, take the variant performed on the knees.

In particular, the back and shoulder muscles provide the ”push” movement above the head.

Where do you feel it?
The handstand affects the shoulder muscles, back, and armpit region in particular. 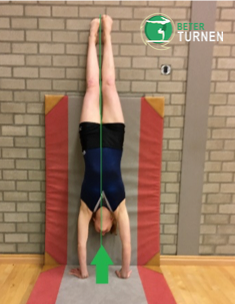 The arms are along with the ears at shoulder width. Tuck the breastbone in slightly, as a common compensation is the stretching of the chest. In doing so, the shoulder angle is not fully opened. Make yourself as long as possible by imagining that there is a fire under the head that you want to push away from, as indicated by the arrow.

Tap around and on the shoulders without the hips swaying. Actually, you want to maintain a line of head-kin-beak-cross (see vertical line).

Hopefully, with the above tips you will be able to perform the arms workout warm-up correctly or use the above exercises in, for example, a power block. Also check out the other warming-up workouts on our Youtube channel. Or check out all the exercises on the gymnastics platform.

About the author
Roxanne Boersma
Website
My name is Roxanne Boersma (24) and I work within Gymnastics Tools as a content developer and coach. I have been doing gymnastics since I was 12 and have been teaching gymnastics to various selection gymnastics groups since 2012. In addition to my passion for gymnastics, I am active in fitness and health (lifestyle and nutrition). I am currently working as a physiotherapist.Quote: "Never give up on what you want to do. The person with big dreams is more powerful than one with all the facts."
Others also read these

Boy's gymnastics: Blog with tips on the basics by Maud
03 maart 2022

How to do a back walkover; read this step-by-step gymnastics exercises
30 april 2021

Back Handspring; how to learn it and how to improve technical mistakes
18 oktober 2020

Like & too Good do anywhere w/o equipment Thanks Girish Dabir Pune India orthodabir@gmail.com